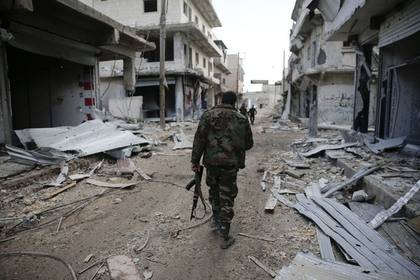 The militants retreated into the depths of the Eastern neighborhoods of Aleppo, currently fighting under the unified command, reports TASS. Their representative Zakaria Malagigi previously said that despite the Syrian troops surrounded the Eastern half of the city, “neither of which surrender is out of question”.

Abdul Rahman Noor was the head of the so-called Army of Aleppo — a coalition of armed groups, in which the leading role is played by the militants of the terrorist organization “Dzhebhat Fatah al-sham”, previously called itself “al-Nusra Dzhebhat” (banned in Russia).

On 3 December it was reported that over the Eastern part of Aleppo, the militants brought down the combat training aircraft L-39 Syrian air force. According to preliminary data, on Board crashed near the city’s airport. The crew of the aircraft were killed.

The operation to liberate Eastern Aleppo from militants began 21 Nov. Government troops and the militia freed the quarter Masakin-Khan — one of the key points of the positions of militants in the city. In this area the government troops were confronted by members of the armed coalition “Jaish al-Fath” (also includes militants of “Jabhat EN-Nusra”).