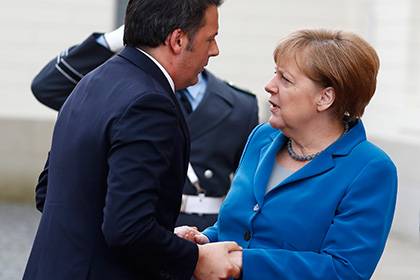 German Chancellor Angela Merkel expressed regret on the future resignation of his Italian counterpart Matteo Renzi. About it reports Reuters.

“The Chancellor received the news about the resignation of the Prime Minister of Italy, unfortunately — said a spokesman for Merkel, Steffen Seibert. They worked great with Matteo Renzi hand in hand and trust each other, but a democratic solution to the Italian voters, as well as the decision of the Prime Minister, should be respected.”

Seibert said that Berlin intends to continue to cooperate closely with the Italian government, regardless of who will lead it after retirement Renzi.

The Prime Minister promised to resign if the Italians will reject his plan of constitutional reform. After you know the results of the plebiscite, the opposition, particularly the leader of the opposition party “Northern League” Matteo Salvini, called for Renzi to immediately leave the post. The head of the government said that tomorrow, December 6, will give the President his resignation.

The Central government of Italy has taken the initiative to reduce the role of the upper house of Parliament, the Senate, as well as pick up some of the powers of the authorities of the regions. According to exit polls, the reform project was supported by 39-45%, whereas a negative answer was given by 57 to 61 percent.