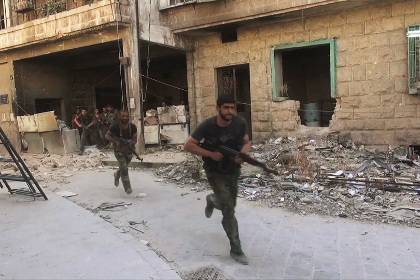 Turkey, Saudi Arabia, United Arab Emirates (UAE) and Qatar have offered to convene an emergency session of the UN General Assembly to discuss the situation in Aleppo, Syria. It is reported TASS with reference to the statement countries, announced the TV channel “al Jazeera” on Sunday, December 4.

The document clarifies that the General Assembly needs to formulate its recommendations after the Security Council are unable to resolve this issue. Saudi Arabia, Qatar, UAE and Turkey backing the opposition forces opposed to Syrian President Bashar al-Assad.

3 December, government troops eliminated in Aleppo commander of the combined forces of gangs Abdel Rahman Nur. He headed the so-called Army of Aleppo — a coalition of armed groups, in which the leading role is played by the militants of the terrorist organization “Jabhat Fatah al-sham”, previously calling itself “Jabhat EN-Nusra” (banned in Russia).

On the same day over the Eastern part of the city, the militants brought down the combat training aircraft L-39 Syrian air force. The Board fell near the city’s airport, the crew perished.

The operation to liberate Eastern Aleppo from militants began 21 Nov.