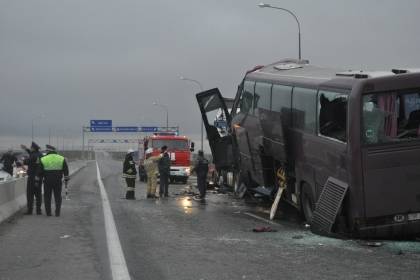 Under the Khanty-Mansi ten people were killed in a major accident, told TASS informed source. According to the Agency, nine out of ten dead children.

According to preliminary data, on the route Khanty-Mansiysk — Tyumen collided with a bus, a truck and two cars. Presumably, another 20 people were injured, reports RIA Novosti.

The bus drove the young athletes from Nefteyugansk, reports Ugranow.ru. They were coming back from competitions in acrobatics.

According to the publication, near Khanty-Mansiysk in the afternoon on Sunday 4 December, there was another major accident on the highway Gornopravdinsk. There 5 people were killed and another 10 injured.

In place of both accidents sent many ambulances.