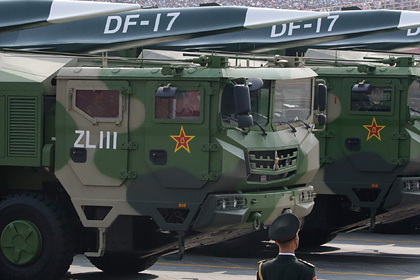 The weapons China tested in July is a semi-orbital bombing system. The statement by the Deputy Chief of the Space Forces for Operations, Lieutenant General Chance Zaltsman reports Breaking Defense.

The military confirmed the assumptions about the nature of the weapons tested by Beijing, expressed earlier by experts. “I think the words we use are important so that we understand exactly what we are talking about here. I hear things like hypersonic missiles, and sometimes I hear suborbital, “said the lieutenant general.

According to him, we are talking about a completely different weapon, which” can remain in orbit as long as it determines the user, after which it is reset. ” Zaltsman noted that this technology is very advanced, and the United States needs to quickly determine how it should be contained.

The publication reminds that such systems were previously developed by the USSR.

In November the American edition of The Drive noted that the July 27 test may indicate China's breakthrough in hypersonic technology. The publication claims that during the test, some product was disconnected from the Chinese hypersonic aircraft, probably a guided missile, the goals and objectives of which for the United States remain unclear.

A similar test, citing its own sources, reported in November publication of the Financial Times.

In the same month, General John Hayten, Deputy Chairman of the Joint Chiefs of Staff of the US Armed Forces, spoke about the tests of a hypersonic missile in China.

In October, General Hayten said that China is ahead of Russia in the development of hypersonic weapons.