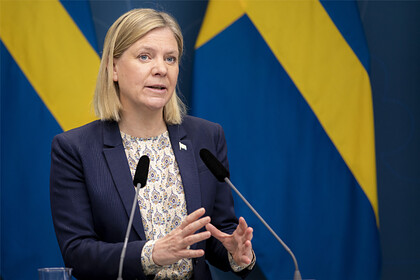 “Freedom from military alliances serves our country well and contributes to stability and security in Northern Europe. Sweden will not apply for NATO membership, ”said the current head of the Swedish government. However, she noted that Stockholm will not stand aside in case of an attack on Europe and counts on the help of European countries in case of aggression in their direction.

“The EU is the most important arena of Sweden's foreign policy and security. Our current chairmanship of the OSCE gives Sweden the opportunity to protect the European security order, ”added Andersson. She also praised the return of the United States to a “constructive partnership” on climate, pandemic and democracy.

Earlier it became known that Prime Minister Andersson resigned after the Green faction left the Swedish government. She had been elected to her office just a few hours earlier. This situation has arisen because the Swedish Riksdag (unicameral parliament) did not support the draft budget proposed by the government, but voted for the budget formed by the opposition.