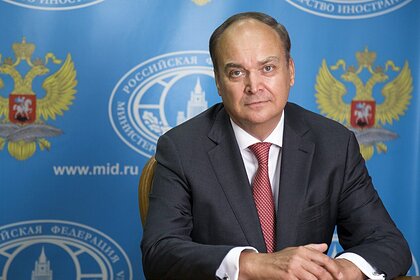 Russian Ambassador to Washington Anatoly Antonov responded to the US’s refusal to consider an expulsion departure of 55 Russian diplomats. According to him, this statement does not stand up to criticism. This is reported by TASS.

As the diplomat noted, it was the State Department in December 2020 that unilaterally set a three-year limit on long-term business trips for employees of the Embassy in Washington and Russian consulates general in New York and Houston. At the same time, Antonov pointed out, a five-year period of stay in the United States applies to diplomatic missions of other countries.

“It was clearly indicated to us that in case of refusal to comply with this requirement, the Russians would be deprived of immunity and other diplomatic privileges. Thus, we are talking about the actual expulsion, “- said the Russian ambassador.

On November 29, the deputy head of the press service of the US State Department, Jalina Porter, said that the departure of Russian diplomats, scheduled for 2022, should not be considered as their expulsion or punitive measure. She stressed that the Russian side was notified in advance of this decision. According to Porter, the United States is allegedly making Russian diplomats the same demands that Russia has presented to the employees of the State Department.

Earlier, Anatoly Antonov said that 27 Russian diplomats would leave the United States on January 30, and the same number would leave on June 30, 2022. that is, only 54 people. He stressed that the spouses of the diplomatic corps employees are deprived of their accreditation, children are not issued visas. The diplomat also said that the United States rejects all of Russia's proposals to restore inter-parliamentary ties, rejects requests for meetings in Congress and refuses to listen to Russian argumentation.

In August, US Ambassador to Russia John Sullivan announced a large disproportion in the number of diplomats who are located in two states. For example, 123 employees of the embassy work in Russia, and in the United States there are 400 Russian diplomats, distributed between the embassy, ​​two consulates and a permanent mission to the UN.