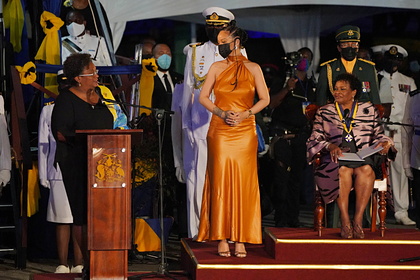 American pop singer and entrepreneur Rihanna without underwear and was cursed on the net. Corresponding comments appeared on Twitter.

The 33-year-old celebrity appeared at a state event in a long orange satin dress and brown sandals with heels. At the same time, in the pictures published by the Daily Mail, it is clear that Rihanna is missing a bra. The singer supplemented her image with rings, bracelets and earrings, as well as a black medical mask.

The artist's fans considered her outfit unacceptable for such an event and began to criticize her on the social network. “A national heroine was announced without a bra and with nipples for the show”, “Barbados became a republic, and Rihanna gave us nipples. It seems that from now on we will cease to be a Christian nation ”,“ Couldn't Rihanna wear something more decent on this special day? ”,“ Thank you for not being naked, ”they said.

that the state of Barbados officially became an independent republic and came out of the rule of the British monarchy. At the event, Rihanna was awarded the title of national hero of the Republic.

In September, Rihanna went out in a transparent skirt and was ashamed on the net. The paparazzi captured the singer on her way to a post-Met Gala party with her lover, rapper ASAP Rocky. She was dressed in a black T-shirt and a skirt made of sheer material through which black linen was visible.