Christopher Anderson: Prince Harry moved to the USA because of the Queen's insulting gesture 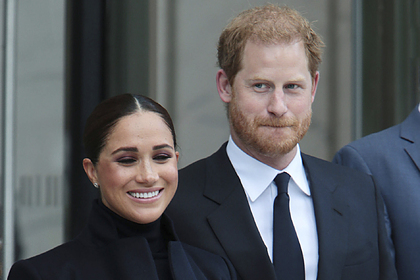 Prince Harry and his wife Meghan Markle have decided to refuse duties of senior royals and move to the United States following a televised appearance by Queen Elizabeth II in December 2019. This is reported by the Daily Mirror.

The true reason for the move is revealed in the book “Brothers and Wives: The Secrets of the Private Lives of William, Kate, Harry and Megan”, which is released on November 30. Its author Christopher Anderson claims that Harry and Meghan are outraged by the choice of photographs on the Queen's desk. There were stills of the late King George VI and Princes Charles, William and Philip, but there was no photo of Harry, his wife and son.

Prince Harry and Meghan Markle left the royal familyAnderson quotes an anonymous palace employee who collected the pictures. According to her, initially there was a photo of Harry and Megan on the table, but it was removed before the broadcast at the request of Elizabeth herself. A possible reason for the offensive gesture was the queen's dissatisfaction with Harry's desire to celebrate Christmas not with her, but with Meghan Markle's mother.

The incident is mentioned in the book “Finding Freedom” by Omida Scobie and Carolyn Duran. “Harry felt that he and Meghan were being pushed into the background and they were no longer a fundamental part of the future of the British monarchy,” wrote its authors.

Earlier, an expert on the British royal family, Russell Myers, expressed a similar assumption. In his opinion, the neglect of Elizabeth II was the last straw that pushed them to move. “The lack of photographs during the Queen's Christmas speech definitely influenced them,” he says.

Previously, representatives of the palace insisted that the photographs showed the order of succession to the British throne. Elizabeth II took the throne after the death of George VI, and when she dies, the crown will pass to her eldest son, Prince Charles. Next in line are Prince William and his children.

Since April 1, Prince Harry and Meghan Markle have ceased to act as members of the British royal family. To be eligible to move to the United States, work and do business, they had to abandon the Your Royal Highness appeal, government funding, and the Sussex Royal brand. In September, Harry and Meghan signed a deal with the Netflix video service, returned £ 2.4 million spent on refurbishing their British residence, and achieved financial independence from the royal family.