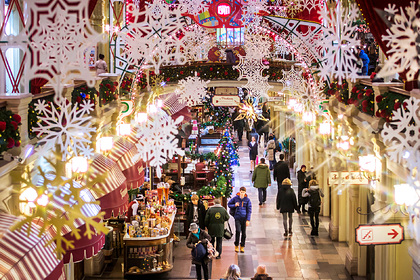 wine, fish, seafood, meat and fruits. Economist, ex-Deputy Minister of Agriculture of Russia Leonid Kholod and President of the Association of Industrial and Commercial Enterprises of the Fish Market Vitaly Kornev told about this to Lente.ru. They added that prices will level out after the holidays.

Kornev noted that at the moment there is no need to expect a sharp rise in prices – everything that could rise in price has already risen in price.

“Business is arranged like this that everyone is preparing for New Year's sales in advance, and it is no longer possible to increase prices under contracts with chains where the bulk of products are sold, – he explained. “All the price increases have already occurred in November.”

Kholod added that, despite the fact that a widespread rise in the cost of production is indeed observed, prices will not be able to grow indefinitely – they will be restrained by the factor of effective demand.

“The food set that we use for the festive table always rises in price simply because the demand increases. This is a purely opportunistic factor. Prices are rising, first of all, for delicacies that people cannot afford in everyday demand, but buy before the New Year. This is some kind of sausage, fish, caviar and so on. But the rise in price comes to naught after the holidays, when demand falls: many eat up what they have bought, and a lot of money is set aside for the New Year's table. By the way, there is also such a factor as effective demand, which can restrain the market rise in prices this year, “the economist admitted.

Compared to last year, caviar, according to Kornev, has risen in price by about 25-30 percent. This happened because in 2020, on the eve of the holidays, there was a serious shortage of this delicacy and this time the suppliers decided to play it safe.

“The situation with red caviar is quite simple – prices were formed based on expectations. Last year, less than the norm was produced, all products were sold in December, and then there was simply no more of it, which gave rise to prices. Well, now the mood among the players has won that the same scenario awaits us this year, everyone invested in caviar, prices have risen again, “the expert said.

Red fish, as Kornev said, went up by the same 25-30 percent, other species – by 10-15 percent. But in many respects, according to him, this is due to the fact that in the world, in principle, there is a trend towards a general rise in price.

“Red fish has grown in price as a result of restrictions that occurred last year. They provoked a sharp drop in prices and reduced production. Now the market is covered with a second wave, which resulted in a deficit and, accordingly, a rise in prices, “- explained the interlocutor of” Lenta.ru “.

Inevitably, according to Kholod, everything that is used to prepare traditional New Year's dishes will rise in price: Olivier, herring under a fur coat, sausage, fish. In addition, as noted by the economist, one should expect an increase in prices for fruits, and not only for tangerines-oranges, but also for all others.

“Now the assortment is wider, so standard types of fruit may rise in price. With drinks, everything is the same: champagne, light wines, and other types of alcohol are becoming more expensive. All this is happening due to market factors, but there are others associated with the pandemic and a number of difficulties in logistics, “said Kholod.

The economist recalled that Russia imports large volumes of food from abroad. But due to climate change, a pandemic, crop problems in several countries and diseases, prices have increased significantly this year.

“Latin America is the leader in meat, the USA is the leader in grains, and Latin America is still the leader in pineapples and bananas. So the background process of rise in prices in these segments has been and remains, many observers note this. Further, the pandemic created serious logistical problems in the matter of international transport. First of all, we are talking about ships: many large ports were closed, which negatively affected container traffic in general, ”explained Kholod. The cold was also caused by the inflation of costs: mineral fertilizers, machinery, spare parts, seeds, seedlings, and their delivery went up. The economist also drew attention to such a serious problem as the monopolization of the trade sphere.

“We have an undeveloped market infrastructure that would be adequate for all types of commodity producers, especially medium and small enterprises. For example, where there is a significant production of conditional potatoes, the costs are also significant. That is why we see how the prices for potatoes and cabbage are growing on farms. Mass competition here could restrain, and perhaps suppress the rise in prices, “- says Kholod.