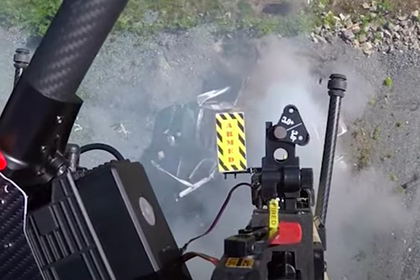 The Norwegian company Nammo has unveiled a new concept of an attack drone. The aircraft was combined with the common model of the M72 LAW anti-tank grenade launcher. This is reported by Army Recognition.

The grenade launcher was installed vertically on the drone. This allows you to attack targets in the least protected upper hemisphere. A disposable grenade launcher can hit enemy personnel, fortifications and armored vehicles.

The publication notes that the effective firing range of the grenade launcher is 350 meters, and the ability to attack targets from above allows you to increase this parameter. The target destruction range is limited only by the capabilities of the drone. The drone's equipment provides signal transmission at a distance of up to four kilometers.

The M72 66mm grenade launcher is not very effective against modern tanks. However, the ability to attack tanks in the least protected areas increases the effectiveness of weapons against heavy armored vehicles.

In October, the head of the Turkish Defense Industry Directorate Ismail Demir announced the tests of a small-sized METE missile. The ammunition is designed to arm the infantry and quadrocopters.

In August, JSC Concern VKO Almaz-Antey conducted tests of the Krechet interceptor drone. The drone received a shotgun that allows it to hit small aircraft.