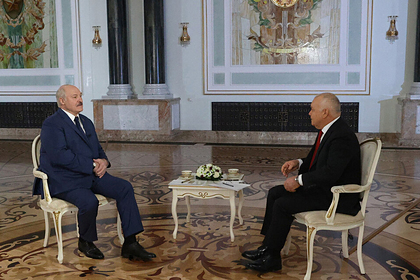 TV presenter and journalist Dmitry Kiselev interviewed President of Belarus Alexander Lukashenko and shared his impressions of the conversation. BelTA informs about it.

In particular, Kiselev said that the conversation turned out to be tense, as he asked difficult questions that could cause some irritation to the head of the republic.

“I went to this risk. But he did it in a humanly benevolent way. And the president also responded very kindly and exhaustively, even more than I could count on, ”the presenter explained.

Kiselev stressed that until the interview was aired, there was no opportunity to discuss its substantive part, however, he noted that his interlocutor referred to a number of historical events and facts, talked about the future, said unpleasant things about Europe and the West, and also spoke about it. personal relations with Russian counterpart Vladimir Putin.

The journalist added that this was his first meeting with Lukashenka and it became a kind of human discovery. According to him, the head of state did not demand to provide questions for an interview in advance and did not limit the conversation in time. Kiselev believes that the resulting material will help to better understand the logic of the actions of the Belarusian leader and his people.

On November 19, Lukashenko gave an interview to BBC News. During a conversation with Steve Rosenberg, the President, in particular, spoke about the aggravation of the situation on the border with Poland and relations with Europe in general, assessed the possibility of a nuclear war with NATO and Russia, and also commented on the political situation in Belarus and responded to calls for dialogue with opposition.

Subsequently, the British journalist said that the most nervous part of the conversation was the topic of relations with Putin – the Belarusian leader could talk at length about the migration crisis or the events of 2020, while his statements about the Russian president were laconic … According to Rosenberg, on the whole, the conversation began quite abruptly – Lukashenka came, the interlocutors sat down and began recording without preamble. At the end of the conversation, the Belarusian leader said “Do not be offended, you yourself started all this,” and then offered to conduct another live interview.