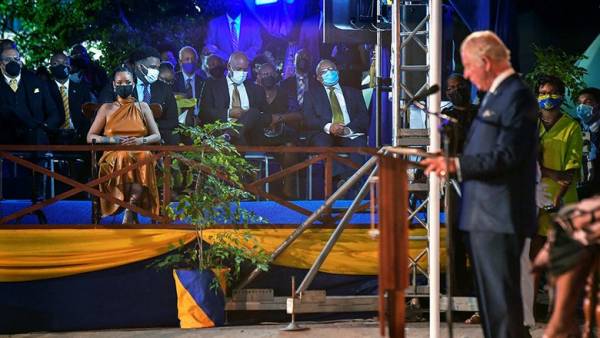 The inauguration ceremony was attended by the heir to the British throne, Prince Charles. & laquo; Creation of a new republic & nbsp; & mdash; this is a new beginning. The inhabitants of this island, with & nbsp; extraordinary resilience, made their way out of the darkest days of our past, the horrific and & nbsp; brutal slavery that forever tarnished our history & raquo;, & nbsp; & mdash; he said & nbsp; in his & nbsp; address, with best wishes from & nbsp; Queen Elizabeth & nbsp; II.

The Caribbean island state of Barbados, whose population now numbers about & nbsp; 300 thousand people, has been under the rule of the British crown since the 17th century. The backbone of the economy of this British possession were plantations, on which slave labor was used.

Slavery in the British colonies was abolished only in 1834.

In & nbsp; 1966, Barbados gained state independence from & nbsp; Great Britain, but remained a member of the British Commonwealth of Nations. The formal head of state, like & nbsp; in a number of other former colonies, remained the monarch of Great Britain, who appointed his representative & nbsp; & mdash; Governor General. In fact, governors-general from the & nbsp; moment of gaining independence by such countries were appointed by the queen solely on the & nbsp; recommendation of local authorities, and & nbsp; executive power remained in the & nbsp; hands of the national government.

In & nbsp; September 2020, the Barbados authorities decided to finally abandon & nbsp; this system and & nbsp; cease formal subordination to the British queen. “ It's time to completely leave behind & nbsp; our colonial past '', & nbsp; & mdash; said in the & nbsp; statement of the government of the country. Buckingham Palace did not & nbsp; began to object to this decision, saying that & nbsp; the question of choosing the head of state & nbsp; & mdash; this is an internal affair of the government and the & nbsp; people of the island.

A BBC source claimed that such a decision by the authorities of Barbados did not come as a surprise to the royal family and had been discussed several times before.

The first President of Barbados was the last Governor General Sandra Mason, she was elected by the country's parliament in & nbsp; October 2021. Mason held the position of the British Queen's representative since & nbsp; 2017. Her & nbsp; inauguration was postponed to & nbsp; 30 & nbsp; November in & nbsp; due to & nbsp; the fact that & nbsp; & nbsp; this date celebrates the Independence Day of the country.

One of the first decisions of the government of Barbados after the final exit from the British monarchy was the announcement of the “national hero” of the country of the singer Rihanna, who was born on this island. The Parliament of Barbados refused to consider Elizabeth II the head of state

This was announced by Prime Minister Mia Mottley at the & nbsp; inauguration ceremony of the first president. Rihanna also attended the & nbsp; event. In & nbsp; 2018, the singer was awarded the rank of Ambassador Extraordinary and & nbsp; Plenipotentiary of Barbados. “ We & nbsp; present you the elected national hero of Barbados and & nbsp; ambassador & nbsp; & mdash; Robin Rihanna Fenty (full name of Rihanna. & Mdash; & nbsp; RBC). And & nbsp; keep shining like a diamond & nbsp; & mdash; The Prime Minister turned to & nbsp; her, making a reference to & nbsp; one of & nbsp; Rihanna's most popular songs, Diamonds.

After Barbados abandoned the & nbsp; monarchy in the & nbsp; world, there are 14 countries that recognize the British monarch as head of state. In & nbsp; all of & nbsp; of them, this tradition remains rather a formality & nbsp; & mdash; Elizabeth II does not have a real impact on the policy of these countries. A similar principle is described by the formula “ the monarch reigns, but & nbsp; does not & nbsp; rules. '' A feature of this system is & nbsp; the fact that & nbsp; being under the rule of the British Queen is not & nbsp; tantamount to state dependence on & nbsp; Great Britain, such countries remain officially sovereign.

Among the states where the British monarch continues to be considered the head of state, there are, for example, Canada, Australia, New Zealand and Jamaica.