President Erdogan: Turkey is ready to become a mediator between Russia and Ukraine 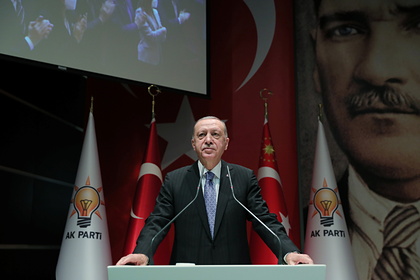 conflict in the region. Turkish President Recep Tayyip Erdogan announced his desire to act as a third party in the negotiations, NTV reports.

“We will develop these negotiations both with Ukraine and with Mr. [Russian President Vladimir] Putin. We want us to participate in resolving this issue, “Erdogan said.

According to the Turkish President, Turkey is in favor of establishing peace in the region. Erdogan stressed the importance of this fact for Turkey because of concern for the fate of the “Crimean Turks” – the Crimean Tatar people.

Erdogan's statements were made against the backdrop of accusations by NATO and some Ukrainian politicians that Russia was allegedly preparing a military operation against Ukraine. Reports of the accumulation of Russian armed forces on the Russian-Ukrainian border appeared in the American press at the end of October, and later Moscow's “unusual activity” was confirmed by the Pentagon. The Kremlin denied this information.

Earlier, Russian politician Vladimir Zhirinovsky said that Turkey “shit everywhere” on Russia. According to the permanent leader of the Liberal Democratic Party, the ideology of nationalism is highly developed in the Turkish state, therefore it defends only the interests of the Turkish people.