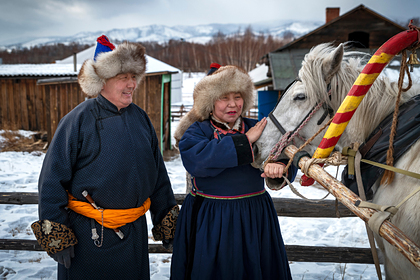 The head of the region, Alexander Osipov, revealed the main “pearl” of the Transbaikal Territory. In his opinion, these are, first of all, people and their “serious and solid” character. LIFE publishes the recording of the program “Let me tell!” /> The soul of Russia. One of the most ancient peoples of the country has survived in Siberia. How does he survive in the modern world? 18: 07 – October 11

Small but smart: why theatrical performances in the languages ​​of small peoples are important for Russia00: 02 – August 10

“It's hard to get there” Dunes, snowy mountains and blooming dream-grass: lost Russia in the lens of a photographer

According to Osipov, these are people accustomed to the harsh climate and beauty of the local nature. “We have a more restrained character, serious, solid, and our athletes are champions in everything. We love to win and take all this seriously, ”said the head of the region. He also remembered the mutual assistance enjoyed by the inhabitants of the region. People try to help whenever possible, there is also a certain patriarchy in their lives, but in a good sense of the word, the head of Transbaikalia explained.

In addition, the region is unique and surprising in that “this is a huge territory of over 430 thousand square kilometers”. “I repeat, these are almost 10 Moscow regions and 20 somewhere in the middle regions of the European part of Russia,” Osipov said.

Transbaikalia is located in a low-mountain climate zone, there are also a lot of sunny days with practically snowless winters. For this reason, the region can be called “one of the sunniest” in the country. At the same time, in the cold season, the thermometer can drop to record low values, and in summer, on the contrary, heat comes to the region.

As Osipov noted, the region is famous for endless forests, mountains, steppes and reservoirs. In particular, there are Torey Lakes in Transbaikalia, which occupy about 500 square kilometers of territory. “The greatest civilizations developed on this land, which” reshaped “the whole of Eurasia,” summed up the head of the region.