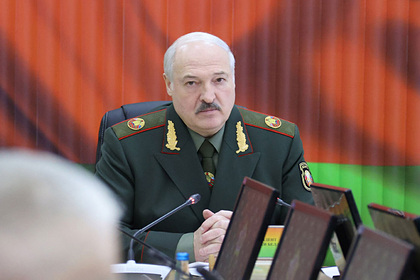 non-standard shoulder straps – not stars are placed on them, like all military personnel, but a coat of arms. The video recording of the meeting was published on the Telegram channel “Pool of the First”.

Lukashenko regularly appears in public in uniform with special shoulder straps. So, in June 2021, he arrived in the same uniform in the Mogilev region, and at the Victory parade on May 9, 2020, he appeared surrounded by the military with gilded shoulder straps.

As noted in 2004, “Independent Military Review” , Lukashenka wore a military uniform to work meetings back in the early 2000s. “The shoulder straps of the Belarusian commander-in-chief have no stars, but with large coats of arms in the middle (just a marshal or generalissimo!); this year the coats of arms are slightly shifted from the center to the edge of the shoulder strap. The spotted jacket with a zipper was without chevrons last year, and the servants were evidently hurrying up and sewn it on, ”the publication of October 15, 2004 says.