Economic Times: Diamonds have risen by ten percent due to the spread of the omicron strain 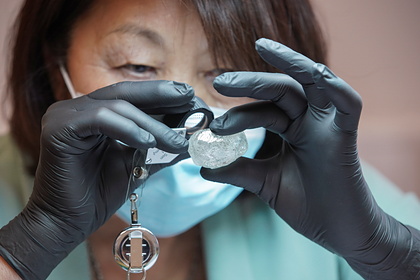 The Indian Economic Times reported that the new omicron strain of the coronavirus has had unexpected consequences for the global economy – rough diamonds have risen in price by an average of five to ten percent. The newspaper's reporters revealed that supply problems began in South Africa and Botswana, both of which have large deposits.

These two states are home to some of the largest mines of De Beers, the largest diamond mining company in the world. The rise in the cost of raw materials has prompted Indian diamond producers to spend their reserves more moderately, as they will have to purchase the necessary materials at a higher price in the near future.

Gems and jewelry are India's second largest export commodity. The share of diamonds in this volume is over 63 percent. 14 out of 15 diamonds in the world are processed in the country. The rise in prices for this type of stones, combined with a possible shortage of raw materials, has caused concern among Indian exporters, primarily from the cities of Surat and Mumbai. These suppliers already have contracts with customers in the United States, China and the Middle East.

“Demand exceeds supply. The proposal has been under pressure since the COVID-19 outbreak last year. Until recently, the situation was in the process of stabilization, but now a new variant of COVID-19, which has appeared in South Africa and Botswana, will put additional pressure on the supply sector, ”said Vice Chairman of the Indian Gem and Jewelry Export Promotion Council (GJEPC) Vipul Shah.

Despite the rise in the price of rough diamonds, the cost of polished diamonds remained the same. “At the moment, there are no problems with the extraction of minerals at our mines in South Africa and Botswana,” said Sachin Jain, Managing Director of De Beers India.

The demand for diamonds in some countries already exceeds the pre-pandemic level. In the summer of 2021, the Russian diamond producer Alrosa sharply increased its diamond sales. Between January and July, numbers climbed 31 percent over the same period in 2019. Sales in the US and China increased by 35 percent and 15 percent in August, respectively.