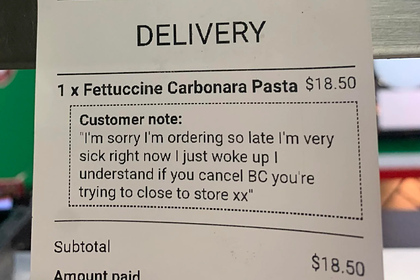 The Australian made an order in the last minutes of the cafe, accompanied by an apology, and received an unexpected response from an employee of the establishment. In the message, the guy warmly thanked the client for his words and made him a gift. A cafe employee with the nickname @ REDPURPLEBLOOD2 shared the story on the Reddit portal. His story touched many commentators.

An employee of the establishment said that a few days ago they received an order 14 minutes before closing. The client paid for the pasta and left a note for the cafe workers. “Sorry for ordering so late, I am very sick now and just woke up. If you cancel the order, I will understand it, ”says the photo of the receipt posted by @ REDPURPLEBLOOD2.

However, the cafe accepted the Australian's order. The user also responded to the buyer. “I also wrote to him and gave him free garlic bread,” the author of the publication said. In his post, he showed a snapshot of this message. “Thanks for the kind note. Do not worry that you order late, everything is in order, “- addressed the client REDPURPLEBLOOD2. He added in the note that messages such as this customer make his day better.

According to the user, the customer, after receiving the note, left a positive review for the cafe on Google. He spoke about the message and a small gift from the cafe workers, and also gave the institution five stars.

In the comments, many users found the story touching and praised the author of the publication for his kindness. “You are my hero. Please keep on spreading positivity. ” The young man did not like the rude statements of his companion about migrants, which is why he ran away from the restaurant.