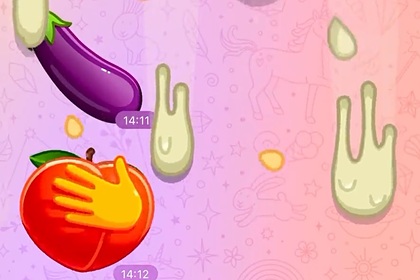 seeds. Otherwise, the messenger could face blocking on all devices of the American company. This was announced by the founder of Telegram Pavel Durov.

He also conducted a corresponding survey on his page in the messenger, in which he asked his subscribers what to do best. The majority of users voted to “completely stop Telegram from working on Apple devices”, and a minority to “remove the gushing eggplant.”

However, despite the voting results, the animation no longer works on iOS, Android and PC clients. Together with eggplant, they turned off the animation of the peach, which is often used in correspondence to denote the buttocks. Previously, when sending, the fruit was accompanied by a slap of the palm.

A spicy animation appeared on Telegram a few weeks ago. To see it, you had to send an emoji to the chat, and then click on it. After that, a light liquid spills out from the peduncle of the vegetable, which seems to be poured across the user's screen. At the same time, the eggplant grows in size.

In mid-November, the scandalous sticker became the object of jokes among Twitter users. They noticed that the vegetable gushing out with white liquid caused them to associate it with ejaculation. In addition, commentators ridiculed the creator of Telegram Pavel Durov and his personal life, believing that the idea to add a reference to the topic of sex to the eggplant animation belonged to him.