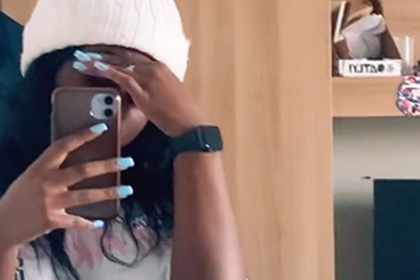 TikTok user under the nickname @ theamazingworldoflory2 caught the guy of treason. In the video, the girl turned to subscribers for help: she asked for help to come up with an original way to present to her boyfriend what she had learned about his infidelity.

The girl said that she had put on her lover's pants for the night and found evidence of treason in her pocket : An open condom package she hasn’t seen before. “I have not yet told him that I am aware of his betrayal, but I want to do it in an unusual way. Crazy girls know how to act in such situations, ”she turned to the subscribers and asked how she should tell the guy about the find. In the comments under her video, the girls have collected the most original ways of revenge.

“Wait for the New Year, let him lay the festive table, invite friends, bring you gifts, and then hand over your surprise with the words:“ I know that the gift is too small, but this is for you “in front of everyone,” one of the users advised. “Leave the package you found on his mother’s desk with a note:“ I found this in your son’s pocket, but it’s not mine, ”another commentator suggested. According to other users, the girl should calmly tell the guy the truth. “Staying calm is the best revenge, girls,” one of the commenters noted.

Earlier, another TikTok user showed how she took revenge on her ex-boyfriend for cheating. The blogger made duplicate keys to the ex-boyfriend's house, scattered them around the city and filmed the process.