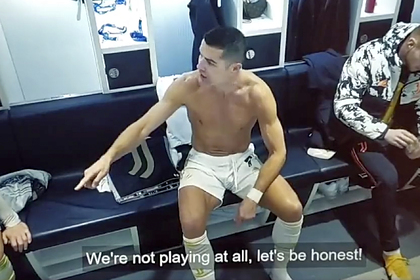 “Dedicated to the performance of Juventus Turin in the 2020/2021 season. They are available on Twitter.

The video shows how the ex-striker Cristiano Ronaldo threw a tantrum during the break of the Champions League 1/8 final second leg with Porto, when the Turin players were losing 0-1. He went into the dressing room and started yelling at his teammates. “Shit! We play like shit! We don't play at all! This is a Champions League game! ” – the footballer said several times and threw the shirt on the floor.

As a result, Porto reached the Champions League quarterfinals: in the first match they won 2: 1, in the second they lost – 2: 3. The film shows Ronaldo crying in the locker room after the meeting.

Ronaldo left Juventus for English Manchester United in August this year. As part of the Bianconeri, he won Serie A twice and won the Italian Cup once.