In the United States, a 78-year-old antiques thief was sentenced to a day of imprisonment and a fine for dozens of thefts 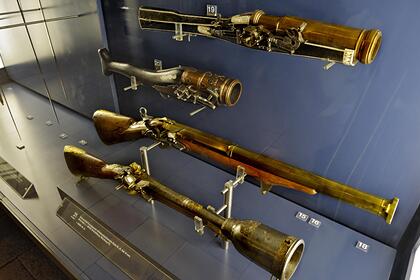 to one day in prison and a fine for stealing a rare American Revolutionary War rifle and dozens of other items. This is reported by BBC News.

Thomas Gavin, who lives in Pottsville, Pennsylvania, has pleaded guilty to possession of a cultural heritage object stolen from the museum. The rifle was made by gunsmith Christopher Oether in 1775 and is estimated to cost more than 175 thousand dollars (more than 13 million rubles). In total, two of the master's rifles have survived in their original condition.

Bloody treasures The largest treasure in history killed dozens of people. But they are still looking for him 00:01 – March 29, 2018

Gavin revealed that he stole Oether's rifle in 1971 from a museum in Philadelphia, Pennsylvania. In addition, the elderly man confessed to dozens of other thefts of antique weapons in the 1960s and 1970s. The kidnapper added that he committed crimes because he “liked to collect antiques.” Therefore, the man was sentenced to one day in prison and a fine totaling about $ 50,000 (3.7 million rubles). After the verdict was announced, the elderly criminal apologized for “causing trouble.”

The FBI tracked Gavin in 2018 when he tried to sell a rifle and other antiques to an unnamed collector. The intermediary who checked the valuables before the deal discovered a mention of the theft of a rifle that fell into his hands in a book by a weapons expert in 1980.

Earlier it was reported that the jewels of the Romanov family went under the hammer at an auction in Geneva, secretly exported from Russia in 1917. In total, valuable items were sold for 885 thousand dollars (62.3 million rubles).