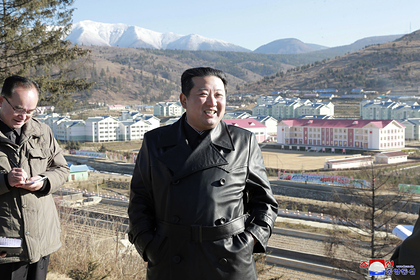 on those worn by the DPRK leader Kim Jong-un. This is reported by Radio Free Asia, citing sources familiar with the situation in the country.

According to the radio station, leather coats became popular among North Koreans in 2019 after the head of state appeared in public with a similar thing. In January 2021, the wardrobe again peaked in popularity after Kim Jong-un appeared in it at a military parade. In addition, at the same time, some high-ranking officials of the DPRK, including the sister of North Korean leader Kim Yeo Jong, were seen wearing leather coats, and therefore such models began to be in demand among women. Another public appearance of Kim Jong-un in a leather coat took place in November 2021.

Initially, this trend was chosen by the local rich, who could afford to order raincoats made of genuine leather from China. However, later, North Korean clothing manufacturers began to sew cheaper leatherette versions. As a result, similar models appeared in all the markets of the country, where ordinary residents were actively buying them.

Against this background, the North Korean police created special patrols that should confiscate cheap leatherette raincoats from sellers selling them in markets and shops. as well as among the residents seen in similar clothes. According to one of RFA sources, law enforcement officers explain their actions by the position of the party, which believes that wearing such fakes by ordinary citizens cheapens the image of Kim Jong-un and undermines his authority.

Previously, the DPRK authorities have repeatedly introduced stringent requirements for the appearance of citizens. For example, in May, Kim Jong-un outlawed skinny jeans and ripped jeans. It was reported that he issued a decree that people who follow extravagant fashion should be sent to labor camps.

In addition, in 2017, journalists reported that a single list of allowed hairstyles was created for North Koreans.