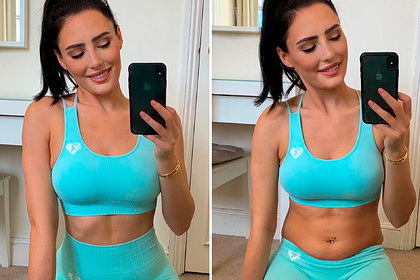 The girl regularly shares pictures in which she demonstrates how her body actually looks without Photoshop. In the latest published collage, she poses in front of a mirror in a blue sports uniform, consisting of a top and leggings. So, in the first frame, she sucked in her stomach and arched her back.

In the second image, Clarke posed in a relaxed position with her leggings lowered to her hips, which caused fat folds to appear on her stomach. In the caption to the photo, the blogger explained that the body visually changes during the day, and this, according to her, is completely normal.

“In the morning I feel fit and motivated. Closer to winter, I start to eat much more to provide the body with energy. At the same time, in the evenings I like to drink hot chocolate, eat marshmallows and other sweets. Usually by the end of the day my belly is swollen. Hormones and stress also contribute to this, “she explained and urged her subscribers to be kinder to themselves and their bodies.

Subscribers thanked Clark for his sincerity in the comments under the post. “Thanks for these words. Love yourself real ”,“ God, you are amazing ”,“ Thank you for your honesty. You are cool ”,“ I love you Georgie, I love your posts! ”,“ You inspire me, ”they said.

Earlier in November, blogger and plus-size model Nelly London ) showed fat folds on the body and delighted fans. On the frame published on the network, the girl captured herself in the mirror. She showed stretch marks on her thighs as well as a scar near her chest.