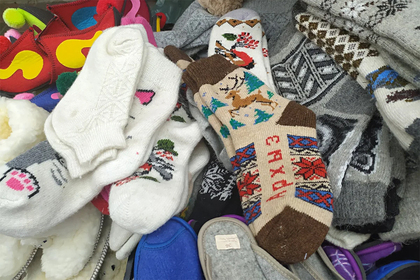 Dombai, in Arkhyz and Abkhazia. She told about this in her personal blog on the Yandex.Zen platform.

According to the traveler, in many tourist locations in the Caucasus, vacationers are offered to buy supposedly authentic goods from local artisans – knitted gloves and socks made of natural sheep wool.

So, during a trip to Arkhyz, she bought mittens with a pattern in the form of red bullfinches. However, a few months later, she saw a similar product in a gift shop in Abkhazia. At the same time, when asked about the manufacturer, she was told that all accessories were knitted by local craftsmen. “It's strange, how can this be? Both in Arkhyz and in Abkhazia, the same craftsmen knit the same products, “she said.

Later, a tourist found the same mittens in a store in her city, where she was told that all products were made at a factory in Voronezh.

“Everything turned out to be much simpler – buy, rate, present as your own and successfully sell. It's kind of offensive. You count on one thing, but you get something else, ”she said.

Earlier in November, a resident of Crimea said that it is necessary to issue a pass to visit certain natural attractions. In case of non-compliance with the rules, the traveler can be fined 4000 rubles. The Russian woman recalled the story of how an unknown woman began to “dig” to her acquaintances, demanding to show the passes and accusing them of violating the integrity of the path. “Keep in mind that a person must be in uniform and with a certificate,” the girl warned.