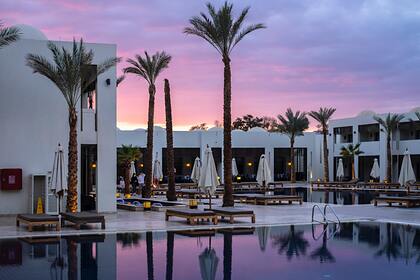 Sheikhe, having paid 98 thousand rubles for a five-star hotel, was delighted. The girl's impressions were published by the portal “Subtleties of Tourism” on the Yandex.Zen platform.

The girl said that because of the numerous negative reviews about Egypt, she was preparing for a vacation “like military action.” She chose a “proven” hotel, popular among compatriots.

As a result, the traveler noted that everything went “with a plus”. According to her, there were always a lot of sun loungers on the beach and by the pools, while none of the guests tried to occupy the sun loungers with towels from the early morning.

“There are no complaints about the food – neither to taste, nor to quality. There are a lot of desserts and fruits, there are always several types of meat or seafood for dinner, “the author added.

In addition, she noted interesting and cheap excursions, a variety of diving locations, the helpfulness of the staff and the diligence of the animators, who” trying 200 percent. ”

“ I think things will work out in Egypt by next year. And everything will be settled with security at the airport, and with the service too, now it is the peak of the winter season, so it is crowded. But Egypt is coping with a solid “good”, “the tourist summed up.

Earlier in November, Russians massively complained about six-hour queues at Sharm el-Sheikh airport due to checks in the departure area. According to tourists, they were in a stuffy hall without water and food, while the airport staff did not respond to complaints and cries of tourists, as well as crying children.