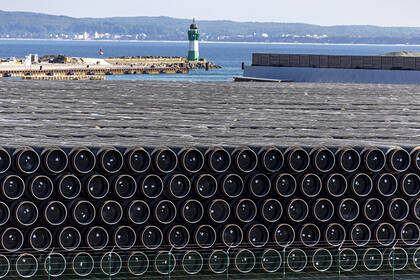 US imposing sanctions on two vessels and one company participating in the implementation of the Nord Stream 2 gas pipeline project. This was stated by Secretary of State Anthony Blinken, CNN reports.

According to him, the new restrictive measures will affect the “Russian-related company” Transadria Ltd and the ship “Marlin” owned by it. It is noted that, according to the MarineTraffic portal, the vessel is sailing under the Russian flag. The head of the State Department did not specify the name of the second ship.

Russian Ambassador to Washington Anatoly Antonov commented on the new restrictions on the part of the United States. The diplomat stressed that dialogue through sanctions is unacceptable and violates international law.

Russian Ambassador to the United States >In addition, Russia flatly denies accusations about Russian energy policy. “Such statements show the disrespect of the United States for its own allies, who are ready to build long-term mutually beneficial cooperation with our country,” the Russian ambassador said. According to him, Russia has proven in practice that it is a reliable partner in the energy sector.

Earlier, a group of Republican senators led by Jim Rich, who heads the US Senate Foreign Relations Committee, proposed adding sanctions against the Nord Stream 2 gas pipeline to the country's defense budget for 2022. The corresponding proposal was sent by six legislators, including Risch.

The FY2022 National Defense Authorization Act (NDAA) was amended to “stop Nord Stream 2,” according to a press release from Risch’s office. The amendments oblige to impose sanctions against the pipeline operator Nord Stream 2 AG. The sanctions also include a ban on entry into the United States, denial of visas and cancellation of valid visas received by persons associated with the project.

At the same time, on November 20, US Senator Robert Menendez, head of the Foreign Affairs Committee, announced that new restrictive measures could be introduced against Nord Stream 2 in the event of Russia's “invasion” of Ukraine.

In the US, it is believed that Nord Stream 2 may begin work in “a couple of months,” Bloomberg reported.

Related materials00: 01 – November 17 Gazprom and the European Union cannot agree on gas supplies and prices. What will this threaten Russia in a few years? 00: 02 – July 30

How the deal between the US and Germany on Nord Stream 2 will force Ukraine to change its attitude towards Russia? introduction of new restrictive measures. Bloomberg also said that the US authorities regard Transadria Ltd as a shell Russian company registered in Cyprus.

On November 16, the German Federal Network Agency (BNetzA) suspended the certification of Nord Stream 2. The regulator wants to wait for the project operator, the Swiss Nord Stream 2 AG, to create an independent subsidiary in Germany, which will transfer all the assets and rights in the country. This threatens to delay the launch until next March, Reuters sources said. At that time, Russia repeatedly stated that Nord Stream 2 was almost completed and ready for operation.