The Belarusian authorities have removed the medieval play from the repertoire because of the replica “Long live Flanders!” 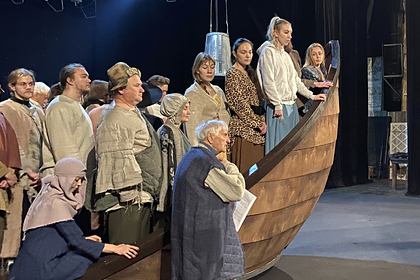 In Belarus, the play “Til” was removed from the repertoire of the Vitebsk theater. According to anonymous sources among the theater staff, the performance was banned by the Belarusian authorities because of the phrase “Long live Flanders!”. The case is reported by Zerkalo.

On November 21, in Vitebsk, at the Yakub Kolas National Theater, the premiere of the play “Till” took place, which tells about the adventures of the Dutch medieval hero Til Ulenspiegel. The play was staged based on the novel of the same name by the Belgian writer Charles de Coster, in the center of the plot of which is the struggle of the Flemings (one of the two main peoples of Belgium and a significant minority in the Netherlands – approx. “Lenta.ru” ) against the rule of Spain.

Moving verdict While Lukashenka talks about friendship with Russia, Belarusians are fined for Russian00: 01 – July 1, 2017

Not again, but movaWill Belarus repeat the path of Ukraine, banning the Russian language

Belarusian officials were present at the show, in particular, the Minister of Culture of Belarus Anatoly Markevich and the head of the main department of state special cultural events Irina Driga. At the end of the performance, guests from the Ministry of Culture awarded the actors and congratulated the theater on its 95th anniversary, but after visiting them, the performance disappeared from the repertoire. According to sources, officials did not like the line “Long live Flandry!” (probably because of the consonance with the opposition slogan, which was recently banned in Belarus as extremist – approx. “Lenta.ru” ) and the use of red ribbons on the stage. The phrase sounded in the Belarusian language, since this language is the main language of the Vitebsk theater.

Earlier, a 21-year-old Russian was put on trial in Belarus “for causing harm to national security”. According to the Belarusian special services, the young man called for a violent seizure of power on Telegram.