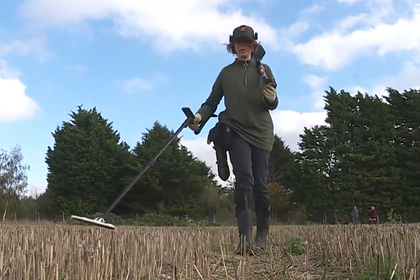 A young treasure hunter from the English town of Mildenhall, our Suffall county ax from the Bronze Age and aroused the envy of competitors. This is reported by The Sun.

13-year-old schoolgirl Millie Hardwicke, along with her 51-year-old father Colin, was carried away by the search for treasures. “Every time I go looking for a treasure, I find something. I found a gilded button and a Queen Elizabeth coin. I like it when, after a few hours in the field, I suddenly hear a metal detector signal. It can be literally anything, “said the girl.

Bloody treasures The largest treasure in history has killed dozens of people. But they still look for him00: 01 – March 29, 2018

When father and daughter went to a field near Royston, Hertfordshire for the third time, Millie found 65 ancient stone ax blades. They date back to 1300 BC. The girl had to skip school in order to properly register her loot. The girl's 48-year-old mother, Claire, said that the amazing find caused the envy of other archaeologists. “A couple of times, when people saw her on the field, they said:“ Oh my God, she is here, so we can go home. ”

Millie became a celebrity among those who are fond of treasure hunting and even got on the front page of this hobby magazine. Now the girl dreams of becoming a professional archaeologist.

She noted that since then people who see her at work ask: “Are you the same girl who found the treasure with axes?”

Earlier it was reported that a unique gold coin found by a treasure hunter on the border of the British counties of Wiltshire and Hampshire will be sold at auction. Experts expect that the coin's value will reach 200 thousand pounds sterling (about 19.9 million rubles) at the auction.