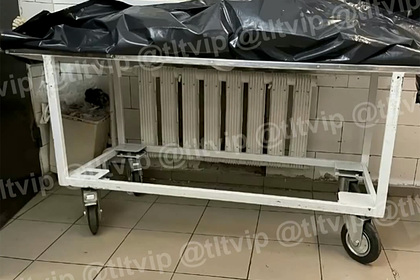 Residents of the city of Togliatti, Samara region, complained about the employees of the local morgue. “Komsomolskaya Pravda” writes about this.

According to people who have lost loved ones, morgue workers demanded money from relatives for any trifle, and if someone refused to pay, the body was taken out of the refrigerator and placed near the battery or on floor, and also tightened with delivery. As a result, the corpses for the funeral were given out to relatives with putrid changes.

The Regional Investigative Committee and the Prosecutor's Office began checking these statements. The head of Togliatti, Nikolai Rents, who previously headed one of the city's hospitals, was also outraged by what had happened. “You can understand the complexity of the work, you can understand the lack of staff. But nothing can justify such treatment of the bodies of dead people, “he said.

Earlier in the Krasnoyarsk Territory, police detained a drunk man suspected of breaking into a morgue in search of an overnight stay and damaging four bodies with a scalpel. He explained that he attacked the dead because he thought they were alive. A criminal case has been opened against him under Article 244 of the Criminal Code of the Russian Federation (“Desecration of the bodies of the dead”).