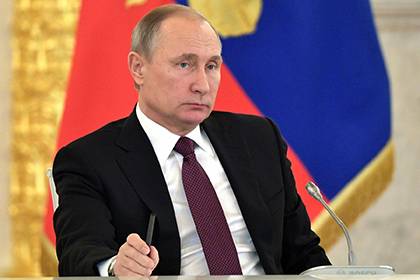 Russian President Vladimir Putin changed the format of the traditional new year reception in the Kremlin after the crash of a military plane Tu-154 crashed into the Black sea. The head of state said on Wednesday, December 28, RIA Novosti reported.

“You know what happened to us, what a tragedy recently. So I want to change the traditional reception in honor of the New year, that he was a working character,” Putin said.

In his speech he stressed that the Russian authorities in 2016, has worked hard and successfully. The outgoing year “was even harder to some extent in solving socio-economic problems than the last”, said the Russian leader. According to him, achieved in 2016, the success is the result of management teams and all the people of the country.

Putin also said that no one can create the Russia of problems which she could not overcome.

Tu-154B-2, owned 223-rd flight unit of the defense Ministry, were sent to the Syrian Latakia. He took off from the airfield near Moscow Chkalovsky and landed in Sochi for refueling. Soon after a second takeoff Board crashed into the sea. 92 people were killed: eight members of the crew and 84 passengers, including members of the Alexandrov ensemble, Executive Director of the Fund “Fair aid” Elizaveta Glinka and Russian journalists. On 26 December, Russia had declared a day of mourning.