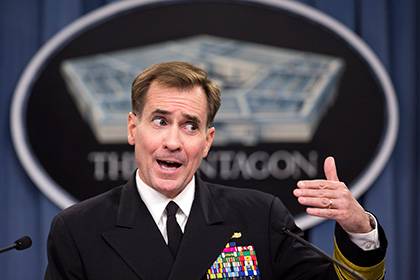 Press Secretary of U.S. state Department John Kirby said that the relations between Washington and Moscow will not be interrupted, Russia and the United States continue the dialogue. It is reported TASS with reference to the written statement, Kirby received by the Agency’s representative office in Washington.

Commenting on the press Secretary of President Vladimir Putin, Dmitry Peskov that the dialogue between the two countries is essentially frozen, Kirby writes: “it is Difficult to understand exactly what the meaning of this comment, but diplomatic interaction with Russia continues on a wide range of issues.”

However, he clarifies that there are disagreements on some of these issues and this fact never disappeared. “However, a break in the dialogue — says Kirby. In fact, Secretary Kerry, as we said, only on Tuesday talked by phone with foreign Minister Lavrov about the situation in Syria.”

Previously, it clarifies the Agency, Peskov in interview of a broadcasting company “the World”, said that “with the US, almost all the levels of dialogue are frozen”. Commenting on the results of the US presidential elections, press Secretary of the Russian leader noted that in the Kremlin there is some hope for a constructive approach of the new team. “We have never suffered from excessive, unjustified optimism, and not wearing rose-colored glasses. We are well aware that any US President will defend primarily the interests of their country. And we believe that President Putin in the first place and always is in the interests of their country,” he added.