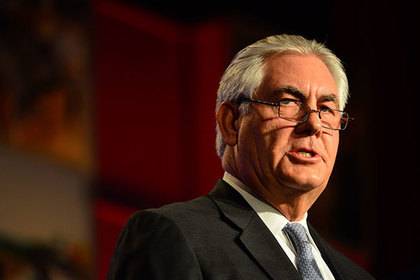 The US President-elect Donald trump has appointed the head of ExxonMobil Rex Tillerson as its new Secretary. About it reports Reuters with reference to the policy statement.

“He is a man, powerfully and clearly defending American interests, and he will be able to correct the mistakes of those years, when foreign policy was going the wrong way and only weakened the security of America and its role in the international arena”, — said the future President of the United States.

Team member trump explained that a Republican has listened to the recommendations of former secretaries of state James Baker and Condoleezza rice, and former head of the Pentagon Robert gates.

In ExxonMobil Tillerson came immediately after graduation and went through the whole career ladder from simple engineer to head of the Corporation. It is known for active work with the Russian company “Rosneft” according to some, direct negotiations Tillerson and Russian President Vladimir Putin facilitated the conclusion of agreements on the implementation of several major projects (in particular, drilling in the Russian Arctic shelf). He was awarded the Russian order of Friendship. Tillerson does not consider sanctions against Moscow an efficient tool and supports the reduction of the role of restrictive measures in American foreign policy.

Tillerson’s candidacy should be approved by the Senate. The assurances of the lawmakers, the process will not be easy — many of them are concerned about “ties with Russia.”