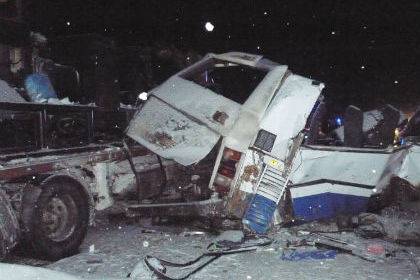 On-site aureipalatii: Medvedev expressed his condolences to the families of those killed in the accident near Khanty-Mansiysk

The President of Russia Vladimir Putin held a telephone conversation with the Governor of the Khanty-Mansiysk Autonomous Okrug — Ugra Natalia Komarova in connection with an event of a major accident, which killed 12 people. This was reported by press Secretary of the President Dmitry Peskov, reports “Interfax”.

Putin expressed his condolences to the bereaved families and instructed the Governor to give all necessary assistance to the relatives of the victims and to the victims. In addition, the President heard the report of the head of Ministry of health Veronica Skvortsova and instructed the Ministry to provide medical aid to the wounded at the proper level.

My condolences expressed by the Minister of transport Maxim Sokolov, reports the national news service (NSN). “This is a terrible tragedy, especially considering that it killed children. All the circumstances of this accident will be thoroughly investigated,” he said.

The accident occurred on the afternoon of 4 December on the route Khanty-Mansiysk — Tyumen, bus of children collided with two cars and a truck. At least nine of the 12 victims are children. Damage of varying severity received more than 20 people. The interior Ministry called guilty of road accident the bus driver to hold it still failed due to the condition.

In the cabin of the bus was carrying 29 children from a sports team acrobatics and three adults. As stated in the TFR, the transfer of the children were not properly coordinated, the bus with the teenagers followed without mandatory when such routes support. In fact the incident a criminal case.