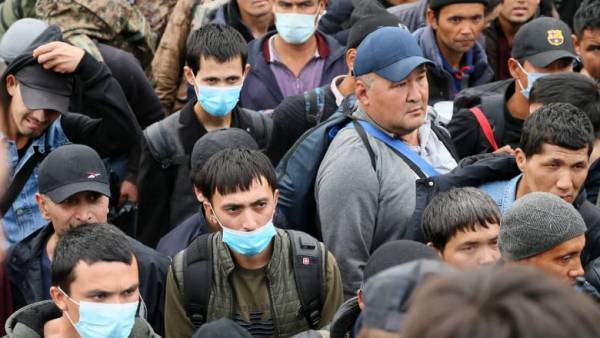 On December 29, amendments to the laws “On the legal status of foreign citizens” and “On State fingerprint registration in the Russian Federation” developed by the Ministry of Internal Affairs come into force. From this date, all citizens of the EAEU countries older than seven years must, within a month after arrival in Russia should provide the Ministry of Internal Affairs with medical certificates – with the results of drug testing and the presence of infectious diseases, in particular tuberculosis, leprosy (leprosy), syphilis, HIV and COVID-19.

It is assumed that they will be valid for a year — after that, the tests will have to be taken again.

“Now there is no document that regulates a specific deadline, but it will appear in the near future,” Vadim Kozhenov, president of the Russian Federation of Migrants, told Kommersant.

Previously, almost the same requirements were established for citizens of the CIS countries: when applying for a patent for a job, they must be tested for sexually transmitted infections once a year.

All these rules do not apply to citizens of Belarus — their stay in Russia is regulated by a separate agreement on The Union State.

Experts pay special attention to the requirement to check for HIV infection. According to the law of 1995, a positive result of the analysis entails a decision on the “undesirability” of a foreigner’s stay in Russia. Only those people who have close relatives-Russians – will be able to stay in the country.

At the same time, Russia is the only country in Europe that deports foreigners only on the basis of their HIV status or in the presence of other infections. Such sanctions are provided for in only 16 countries of the world.

“I understand where the problem came from,” a member of the Regional Expert Group on Migrant Health in Eastern Europe and Central Asia (EECA) comments on the innovations Daniil Kashnitsky.— There are about 2.5 million citizens of the EAEU countries who come to Russia can live and work, and there is no requirement for infection control for them. But the requirement of an undesirable stay is epidemiologically unjustified, since all infections from the list, except HIV, are treatable. And HIV can be controlled with ARV therapy.”

Kashnitsky recalls that HIV is no longer considered a deadly disease: when an HIV-positive person takes therapy, his viral load is reduced to an undetectable level and is not transmitted to other people even with unprotected sexual contact.

Recall that the EECA region is the only one in the world where new HIV cases continue to “grow rapidly”, but treatment coverage remains at 53%. Such data was provided by the director of the international charitable foundation “Public Health Alliance” Andrey Klepikov at the December forum “Sustainable Healthcare: HIV and COVID-19 in the EECA countries”. At the same time, Russia leads in the number of HIV cases in the region — 54.9 per 100 thousand population, whereas, for example, in Tajikistan, 14.2 were detected, and in Kyrgyzstan — 13.2.

The expert emphasizes that many migrant workers hide the disease because of the fear of deportation. They are not registered in AIDS centers, therefore, do not receive antiretroviral therapy — and as a result, they end up in hospitals in a serious condition.

But there, according to the law, they can no longer be denied emergency medical care. Earlier, experts of the Regional Expert Group calculated that if a person does not hide the disease, the cost of therapy will be 83,084 rubles per year, or approximately 6924 rubles per month. Moreover, these costs “when certain amendments are made to the legislation” may well be paid at the expense of the country of citizenship. But if a foreigner with HIV infection reaches the stage of emergency inpatient treatment, it will cost 228,572.6 rubles for 21 days, and from the budget of the Russian Federation.

In addition, Mr. Kashnitsky warns: in a situation where migrants are forced to hide their HIV status in order not to lose their jobs, there is a high risk of appearing in Russia is another risk group for the spread of HIV infection.

The head of the Federal AIDS Control Center, Vadim Pokrovsky, also doubts that the amendments to the legislation will delay the penetration of any infections into the country. He agrees that innovations can transfer even more migrants to an illegal state.

Pokrovsky notes that HIV specialists oppose barriers to the movement of people living with HIV from country to country.

“If we are fighting HIV infection with the whole world, we should do it in all countries, because the approaches are the same everywhere,” Mr. Pokrovsky sums up.

Vadim Kozhenov agrees that it would be “more correct” not to expel migrants with HIV, but to provide them with pills — after all, AIDS centers in their home countries are ready to provide therapy. “But this only concerns HIV. If we are talking about other infections, such as syphilis, there is no such mechanism,” the expert emphasizes.

Alexey Mazus, the chief freelance specialist of the Ministry of Health on HIV infection, emphasizes that many states have a requirement for mandatory medical examination when entering the country for a long time, “this is part of civilized international practice.”

According to him, many foreign citizens are being tested for HIV for the first time in their lives – with mandatory pre- and post-test counseling – precisely when entering the territory of the Russian Federation.

“I must say that for those already in For foreign citizens, medical care, in particular emergency, is provided on an absolutely equal basis with the residents of our country, at the expense of the state budget. Unlike many other countries, where even an ambulance call by a foreigner, not to mention hospitalization, threatens to issue a substantial bill,” says Mr. Mazus. Thus, he summarizes, there are no objective risks of labor migrants going “underground”.