At Baikonur, the Soyuz MS-20 crew with Japanese tourists was escorted to the song “Grass at Home” 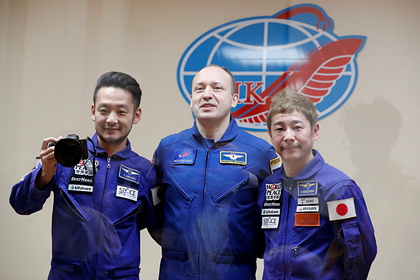 The Soyuz MS crew -20 “, which includes space tourists from Japan, performed to the song” Grass at the House “by the group” Earthlings “, performed in Japanese. On December 8, a spacecraft on a Soyuz-2.1a rocket will take off from Baikonur. This was reported by RIA Novosti.

The first verse was sung in Russian. Roscosmos said that the original version of the song was performed by the Deai duet, consisting of Japanese Natsuki Sugawara and Russian musician Vitaly Suntsev.

It is noted that all crews flying to the International Space Station (ISS) traditionally leave them hotels to the song “Grass at home”, and then by buses go to try on spacesuits, and then to the ship

On Wednesday, two Japanese space tourists, businessman Yusaku Maezawa and producer Yozo Hirano, will go into space on the ship ” Soyuz MS-20 “. The crew will also include Russian cosmonaut Alexander Misurkin. They are expected to spend 12 days in space, perform a series of experiments and return to Earth on Monday, December 20.