Ukrainian Foreign Ministry: distribution of United Russia party cards does not compensate for the grief of Donbass residents 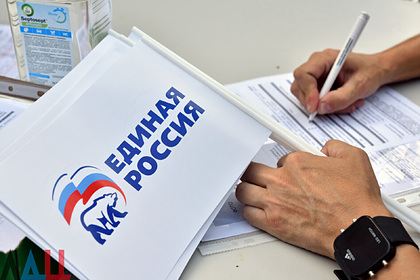 Donbass contradict Moscow's obligations under the Minsk agreements and the Normandy format. This was stated by the speaker of the Ministry of Foreign Affairs (MFA) of Ukraine Oleg Nikolenko, reports “Interfax-Ukraine”.

He commented on the distribution of United Russia party cards in Donbass and noted that such actions of the Russian side “grossly violate Ukrainian legislation and international law.”

Related materials0: 01 – April 16 ” We have nowhere to retreat “DPR head Denis Pushilin – about the threat of a big war in Donbass and the protection of Russians in Ukraine 17:26 – 23 November DPR and Ukraine declare mutual shelling and are preparing for war. Why are Russia accused of aggravating the situation in Donbass?

According to him, in this way Russia is trying to squeeze the maximum out of the “forceful seizure of territories in the Donetsk and Luhansk regions.” At the same time, Nikolenko stressed that United Russia party cards or career contacts for Donbass officials do not compensate the residents of the region for “the grief and poverty that the Russian occupation has brought.”

The Foreign Ministry speaker also suggested that Moscow influence the improvement of the situation in Donbass “By real steps, not political projects”, in particular – to order the observance of the ceasefire, unblock the work of the checkpoints of entry-exit (EECP) and not interfere with young people who want to move to Ukrainian territory.

Prior to that, the head of Rossotrudnichestvo Yevgeny Primakov reported that more than half a million had already been issued in the self-proclaimed republics of the region. Russian passports.