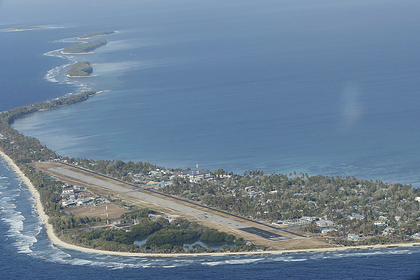 Minister of Foreign Affairs of the island state of Tuvalu (in Oceania) Simon Coffee , who recorded an appeal for the UN climate summit (Cop26), standing knee-deep in water, said that if the state was flooded, residents would be forced to move. He shared the details in a conversation with Lenta.ru.

The Tuvalu authorities are considering the worst-case scenario due to global warming – the island's territory will be flooded by the world's oceans and will be unsuitable for life. According to Coffee, if this happens, Tuvalu will become the first country in the world to relocate due to climatic disasters. About five thousand Tuvalu residents have already moved to New Zealand. “At the moment, this is about 50 percent of the total population of our state,” said Coffee.

The country has already begun preparations for a similar situation – the authorities are trying to resolve the issue from the standpoint of international law. “We are trying to come up with countries to recognize Tuvalu, even if we lose our territory. We are also discussing technologies with the help of which we can create a digital nation so that we can continue to act together, even when we are in a different place, ”the minister said. As one of the measures, Tuvalu plans to digitize all processes so that residents can receive services online.

The Minister of Tuvalu became famous after his speech for a conference and the appearance on the network of a photo in which he, dressed in a business suit, stands knee-deep in water. The shots were taken on the island of Fongafale, where the capital of the state is located. Thus, the Tuvalu authorities wanted to draw attention to the problem of changes in the global sea level due to climate.