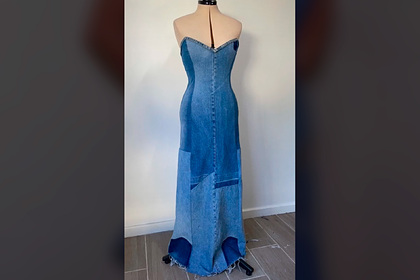 pop singer Britney Spears, in which she attended the 2001 American Music Awards. The video published on TikTok was noticed in the Daily Mail.

Blogger Hayley said that to recreate the singer's outfit she bought several pairs of jeans at The Salvation Army for $ 10 (750 rubles). After that, the designer made the markings on the mannequin, washed the jeans and cut them into component parts. Then the girl cut out the pieces of the necessary shape from the material and sewed them together. According to the master, the whole process took her two days.

The footage shows that the outfit is identical to the original Spears dress. Hayley admitted that she was able to get hundreds of dollars for her work by selling it on the Internet for $ 350 (26.2 thousand rubles). Netizens appreciated the clothes created by the designer in the comments on her Instagram account. “This is incredible!”, “I love this dress! It's stunning! You are gorgeous ”,“ Just wow! ”,“ I love it! ”,“ I can't believe it! ” – they wrote.

Previously Britney Spears named the designer of the future wedding dress in November. The pop singer shared pictures in which she poses in a fluffy pink dress. In the above footage, she is in front of a white background with her hair down and smoky-eyes makeup. “Donatella Versace is sewing my wedding dress right now,” the artist explained.