A married couple installed a bubble house in the forest near Tyumen, made at the Russian plant 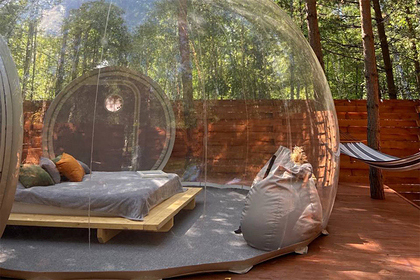 -bubble) – it was installed on their own land plot by a married couple of local residents. You can live a full life in a frameless structure made of transparent film, where air is continuously supplied. This is reported by Rossiyskaya Gazeta.

A pandemic forced the couple to create an unusual vacation spot – the borders were closed, and all interesting tourist sites in the region were occupied. A huge tent, made to order at a Russian factory, was set up right among the pine trees. “There are only two bubble houses in Russia: one is near St. Petersburg, the second is ours,” said the author of the project. – In general, they are popular in Bali – balls for living, in which, however, you will not be spoiled, stretch along the coast of the Indian Ocean. It's very beautiful. ”

The diameter of the house is five meters. The couple have already tested the recreation area and are now ready to offer it to guests. The entrance lobby and the toilet in the house are darkened, and a wooden fence is installed around the perimeter. The film from which the inflatable house is made can withstand extreme frosts.

Earlier it became known that 81 percent of Russians are interested in living in rural areas. Half of them are ready to move out of town for permanent residence, 25 percent would like to periodically live there.