In 2022, the Medical Assistant's House will be restored – an object of cultural heritage near Voronezh 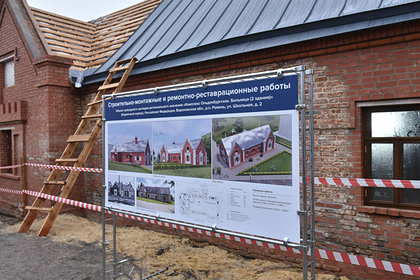 values. This became known during the inspection trip of the Deputy Speaker of the State Duma Alexei Gordeev, RIA Voronezh reports.

The building in Ramon is part of the Oldenburgskys' palace complex. By the spring of 2022, it is planned to make the coating and finish painting of the structure, as well as to improve its territory.

At the moment, specialists are engaged in the reconstruction of the historical appearance of the building, as well as the laying of power supply, heating, water supply, sewerage, and ventilation networks. It is noted that the brickwork has been updated by almost 70 percent: for this, a special brick of non-standard size was ordered from the Tula region.

It is noted that the contractor himself informed the former governor of the Voronezh region about the completion date.

Earlier in November, it was reported that the restoration of the “Dacha of Sinakevich” was started in Perm. It is known that the building on Tantsorova Street in the Kirovsky District is a cultural heritage site. First, it is planned to strengthen the supporting structures and replace the foundations, and then – the installation of the roof, repair of balconies and other works.