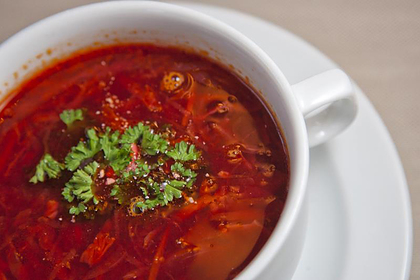 tourists to the country. The lawmakers decided that the holiday for the popularization of Ukrainian culture should be in honor of “something exclusively Ukrainian” – and they chose borscht. The plans for the adoption of the bill on the day of borscht were shared by the deputy from the Servant of the People party Yevgenia Kravchuk.

“Our borsch, and this is indisputable,” said Kravchuk on her Facebook page. A member of the ruling party, she registered in the Verkhovna Rada a draft resolution “On the appointment of the day of Ukrainian borscht”, which she proposed to celebrate every second Saturday in September.

Related materials00: 01 – October 26 “Politicians just want to embroil us” The story of a Russian woman who accidentally moved to Georgia and fell in love with her12:59 – Today

Cultural map of Russia. the results of the competition, which was conducted by “Lenta.ru” together with the Ministry of Culture

Other Ukrainian deputies enthusiastically responded to the idea of ​​perpetuating the dish. “Day of Ukrainian borscht should be a fantastic holiday. This is the support of the Ukrainian spirit and the popularization of something exclusively Ukrainian, ”said Yaroslav Yurchyshyn, the people's deputy from the“ Voice ”party. However, according to some reports, the day of borscht already exists unofficially and is celebrated on November 10.

At the beginning of 2021, in order to protect borscht from belonging to Russian culture, Ukraine submitted to UNESCO a dossier “Culture of Ukrainian borscht cooking” with a request to include soup to the list of Ukrainian intangible heritage. “When you go to a restaurant abroad, you will most likely see“ Borsch (Russian soup) ”on the menu,” complained Ukrainian chef Yevgeny Klopotenko.