During the tests, the Ukrainian T-84 tank was shown in the thermal imaging sight 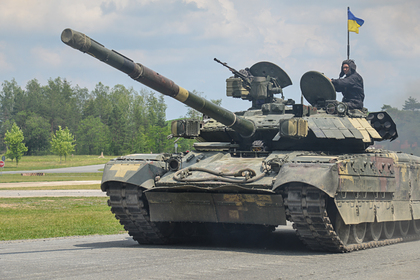 The visibility of the Ukrainian T-84 tank in the thermal imaging sight was checked during the tests in the USA. Images of the car were posted by a Twitter user. This is reported by “Rossiyskaya Gazeta”.

The photographs show the T-84 tank, which was captured from several angles. The publication suggested that the photographs were taken while checking the visibility of the T-84 in various conditions.

In 2003-2004, the United States purchased four T-84 tanks, which are based on the design of the Soviet T-80UD. The American side received vehicles with the upgraded Drozd active protection system.

Earlier, the US appreciated the Ukrainian BM Oplot tank. In the publication 19FortyFive suggested that the modernization of the T-84 will not be able to affect the course of the battle.

In February, the T-84 was spotted near the Yuma test site in Arizona. The publication of The National Interest suggested that the tank would be used to train the American military.

The T-84 is based on the Soviet T-80UD tank. The Ukrainian modification received a 1200 horsepower engine. Also, the T-84 was equipped with new sighting devices, a complex of optical-electronic countermeasures and dynamic protection “Knife”.