In Iraq, Soviet T-72 tanks were modernized with the help of Chinese developments 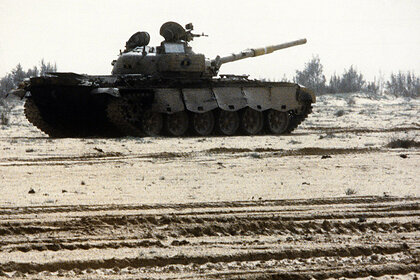 development. Some samples of T-72 tanks were modernized with the help of Chinese developments. Rossiyskaya Gazeta spoke about the modernization of Soviet tanks.

Despite the difficult relations between the Soviet Union and China, Iraq simultaneously used the developments of the two countries. The T-72 “Ural” and the T-72M1 were used simultaneously with the Chinese Type-59-I and Type-69-IIG.

Later, elements of the Chinese vehicles were used on the Iraqi T-72. Soviet tanks were equipped with Chinese-made side screens, which increased the protection of combat vehicles. Standard aluminum screens were replaced with Chinese parts.

Also, Iraqi T-72s were equipped with Chinese-made optical jammers. The publication notes that these systems are considered a simplified analogue of the “Shtora” optical-electronic countermeasures complex. The publication emphasizes that Chinese developments led to the advantage of Iraqi tankers in the confrontation with Iran.

Earlier, The Drive commented on the modernization of Russian T-72 tanks. The publication suggested that the screens at the top of the tower are designed to protect tanks from loitering ammunition and drones.

In October, the DPRK Central Telegraph Agency showed a new tank. The images show a vehicle believed to be a hybrid of the American M1 Abrams tank and the Russian Armata.