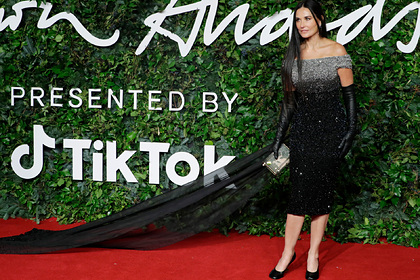 American actress and model Demi Moore attends the 2021 Fashion Awards in London and puzzled fans with her appearance. Fans scolded the celebrity for his artificial appearance in the pictures from the event. Corresponding photos and comments appeared on the Daily Mail.

The 58-year-old artist appeared on the red carpet with her hair down in a tight-fitting black and gray Fendi midi-length dress, which is completely embroidered with sequins. Her look was complemented by black leather heels and gloves, as well as a small clutch and minimalistic earrings.

Fans began to discuss Moore's changed face. In their opinion, the actress resorted to an excessive number of cosmetic procedures to rejuvenate him. “Her face looks the same as it did at the beginning of this year when she appeared on the catwalk. Too much Botox and surgery “,” Demi, what have you done? “,” Demi Moore looks like she has a lemon in her mouth. Why don't people understand how ridiculous they look? ”,“ She was a beautiful woman. Now Demi's face looks very strange, “they were indignant.

On January 27, Demi Moore took to the podium at the Fendi show in a black satin suit. The attention of fans was attracted by the new face of the actress: they spoke on Twitter about the possible plastic surgery of the celebrity. “Unfortunately, but it looks like she also reshaped her face,” they wrote.