A fisherman from Minnesota managed to catch a record mascinong pike 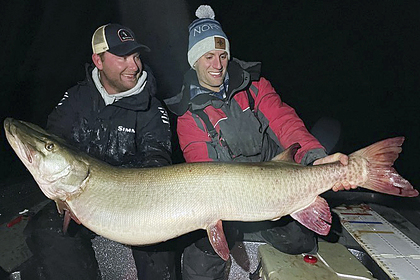 In the US state of Minnesota, a fisherman caught a huge record mascinong pike, which held 64 years old. This is reported by USA Today.

27-year-old Nolan Sprengelra managed to catch a fish weighing 25.37 kilograms. “It only dawned on me how gigantic she was after I pulled her out of the net,” he recalls. According to him, the length of the pike was 1.47 meters, and its thickness reached 74 centimeters.

Until now, the largest Musquinong in Minnesota was considered to be a specimen weighing 24.49 kilograms, registered by the State Department of Natural Resources in 1957 … Sprengeler expects that his catch will be recognized as a new state record, and has already drawn up the necessary documents for this.

Muskinong pike live in North America. Representatives of this species reach 1.8 meters in length and weigh up to 32 kilograms. The maximum lifespan is 30 years.

Earlier it was reported that in the American County of Rutt, Colorado, inexperienced fishermen managed to fish a record large pike. The caught fish was 1.2 meters long and weighed over 17 kilograms.