On the square in front of the Buryat Drama Theater in Ulan-Ude, a sculpture “My Universe” was installed 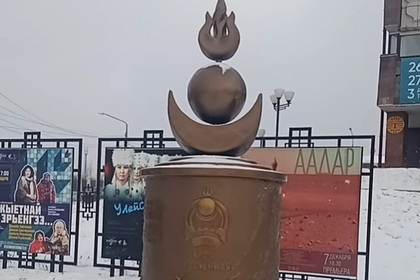 the drama theater installed a new art object “My Universe”. This was reported by “BMK” with reference to the press service of the institution.

The installation was created by the artist-sculptor Anatoly Shobolov at the initiative of the Association of Artists of the Republic of Buryatia. The Russian Helicopters holding and the Ulan-Ude Aviation Plant sponsored the creation of a contemporary art object.

It is noted that the sculpture is made of natural stone using various artistic technologies. In its form, the work resembles a Buddhist prayer drum “khurde” with iconic ethnographic sketches on the canvas. The object is also engraved with the symbol of the republic – the sign “Soyombo”, which combines the Sun, Moon and flame.

The monument is mobile, so it will be moved around the city. The sculpture is conceived as a meeting and recreation place for the townspeople.

Earlier in November, an art object with the image of the Soviet rock musician Viktor Tsoi appeared in Pskov. A mural with a portrait of the founder and leader of the Kino group was painted on the facade of a building on Kalinin Street.