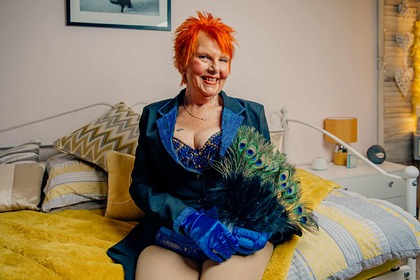 Marilyn Bercy claims that since childhood she was a full child. By the age of 15, she weighed 95 kilograms and continued to gain weight. Later, the mother made the girl lose weight, but she quickly gained the lost pounds. This went on for most of her life: she either lost weight, then gained weight again. Bercy took her weight seriously when she was already over 45, and by the age of 66 she had lost 41 kilograms.

When her husband died, and the children grew up and parted, the woman realized that she had no one left. “I felt lost,” she recalls. – I am no longer a mother to anyone – I had children, but they no longer need me. I'm not a wife to anyone. Not a daughter to anyone. Who is Marilyn now? ”

It was during this period of her life that Bercy saw an advertisement for a burlesque group and decided to enroll there. She was embarrassed by the age difference with other participants in the performance, but the fears were in vain. She came up with the pseudonym Foxy La Mer and has been performing in burlesque shows ever since.

“Now I know exactly who Marilyn is,” says Bercy. “She is Foxy La Mer.” According to her, despite her venerable age, she feels sexier than in her younger years. “And who dares to tell me that it is impossible to feel this way in old age?” She asks.

In 2017, it was reported that the world's oldest climber, Min Bahadur Sherkhan from Nepal, died while trying to climb Everest again and become the oldest mountain conqueror. He was 85 years old.