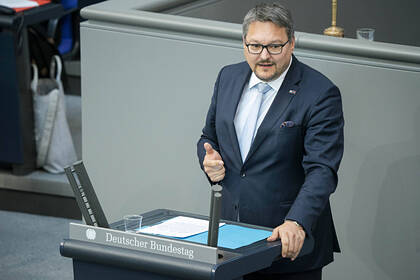 Kiev's demand for reparations from Germany through the press contradicts diplomatic practice. Thus, in an interview with Izvestia, the Bundestag deputy from the Alternative for Germany, Stefan Koyte, commented on the words of the Ambassador of Ukraine to the Federal Republic of Germany Andriy Melnik, calling such a gesture extremely clumsy.

“I resolutely reject Melnik's demands for reparations. For decades, Germany has paid billions of German marks in reparations to the Soviet Union, of which Ukraine was a part, “he said.

Related materials 00:01 – November 2 “We cannot live in enmity” Why does Zelensky want to meet with Putin and what is he willing to do in order to maintain power? 00:03 – September 4

At the same time, the German politician noted that he does not support the idea of ​​Ukraine's admission to NATO, since Kiev will force the North Atlantic Alliance to unleash a conflict with Russia. Koyte wished good relations with Moscow and advised the German authorities not to allow them to be used as a tool to achieve their goals.

Koyte added that war reparations should remain a part of history and not play a role in modern politics. According to the deputy of the Bundestag, European youth, their parents, as well as grandparents have already overcome old conflicts. In this regard, Koyte urged to pay attention to pressing current problems such as the security of energy supply to European countries.

On November 28, it became known that the Ukrainian Ambassador to Germany Andriy Melnyk demanded that the German government pay reparations for cultural values ​​lost during World War II. Among them is the archive of the scores of the composer Johann Sebastian Bach, transferred to Berlin during the presidency of Leonid Kuchma. Melnik sent a letter to the chairman of the Berlin Singing Academy Foundation, Georg Graf zu Castel-Castel. At the same time, the diplomat noted that Berlin should support Kiev on the way to EU membership.