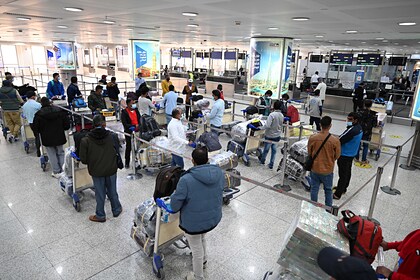 Russian tourists who stuck in South Africa due to the discovery of a new strain of COVID-19 in South Africa, disclosed the details of their situation and described it with the words “we will sound the alarm if we do not fly away on December 1.” RBC writes about this.

According to a traveler from Moscow, at least eight people he knew were in a similar situation; he met several more Russian vacationers at the Johannesburg airport. “I think a lot of people planned to return by Monday and ended up stuck,” he said and noted that the return flight had been purchased for November 27, but Qatar Airways canceled the flight. At the same time, the Muscovite added that at present the situation in the republic is “the most ordinary.” purchased return tickets for December 1. First, tourists plan to fly from Cape Town to Addis Ababa, and from there to Moscow.

Several other Russians said that they had bought tickets for December 8 and 14 from Cape Town, while the airlines have not yet canceled flights. “We believe it’s a matter of time,” one of the travelers suggested.

Since November 28, Russia has indefinitely restricted the entry of citizens from a number of African countries, including South Africa, Botswana, Lesotho and Namibia, due to a new strain of coronavirus … Several European countries have already limited air traffic with South Africa. Among them are Germany, Great Britain, Italy, the Netherlands, France, Austria and the Czech Republic.